dla3d is no longer being supported, as it has been superceded by an arbitrary-dimensional version called dla-nd. Please see that page for the most recent version of the code. dla-nd will still perform all of the computations seen on this page.

(Gaithersburg, MD, 2003-12-05) I've spent the last 36 hours in this kind of mission-directed funk over diffusion-limited aggregation (DLA), only to peer outside to see nature laying a blanket of snow all over everything.

I think it started earlier this year, when I witnessed the fractal-like dendrites of DLA in two places: fingers of a growth on a rock at the National Science Museum on the Mall in DC,

(also here and here, or just look at all of the pictures I took there), and lichen growth on a rock at Great Falls Nat'l Rec Area.

Then on Sunday thru Tuesday of this week, I had been paging through Barabasi and Stanley's "Fractal Concepts in Surface Growth" book, and I noticed the chapter on DLA. I wanted to create the shapes on my computer, but didn't think the basic algorithm was fast enough (they never are). One makes an image of DLA by releasing a particle a distance from a seed particle, and letting the released particle perform a random walk until it hits the seed particle, then freezing it and releasing another particle.

On Wednesday, while I should have been thinking about work, I thought of a way to speed that up. A random walker has an even chance of ending up on any point on the surface of a sphere, as long as the sphere is free of obstructions. This means that I can skip thousands of steps by simply determining how far the current particle is from the nearest frozen particle, and then moving the current particle that distance in a random direction. Hopefully, it'll move close enough to the frozen structure to intersect one of the frozen particles and become frozen itself. If the particle chooses to move away from the frozen structure 5-10 times in a row, just kill it and start a new one. Because the particles occupy a point in free space, and are not confined to grid motion, the simulation is called off-lattice DLA.

So, on Wednesday night, I took my 3D particle system program and stripped it down to the inputs, outputs, and octree spatial subdivision code. Then, I built up a 3D DLA code. It was working before I went to bed.

The next day I fixed some bugs that were slowing it down and producing too much overlap, and most of the day yesterday was spent tending some runs and rendering some images. Keep in mind that the photos above are 2D DLA, and the program I wrote only does 3D. I suppose I could write it to do things in 2D, but I'm not that motivated. 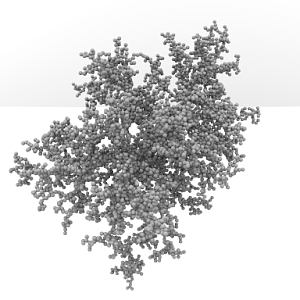 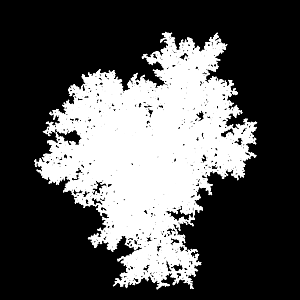 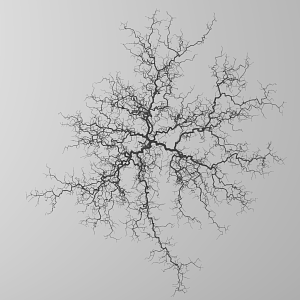 Continuing with the story, last night, as El read an ebook, I curled up with Gleick's Chaos and read about how simple imbalances of three-equation dynamical systems give rise to a near-infinity of shapes. Case in point: the balance of forces in a growing snowflake teeters between surface tension of liquid water and diffusion of the heat released when water freezes. These forces swap importance as the temperature and humidity vary, even very slightly. Since a single snowflake is so small, its entirety encounters almost the same external influences the whole way down to the ground, resulting in nearly symmetric snowflakes. Now, since turbulence makes every snowflake's path through space and its influencing fields of temperature and humidity different...we have a saying for this.

After reading Gleick for two hours, I looked outside and Gaithersburg had received its first snowfall of the winter.

(2004-02-26) I implemented stickiness a few days ago. It works like this: when a particle approaches to within a given distance of another particle, that particle is given a chance to stick. Normally, the probability is 1.0, but in a less-sticky DLA, that number is reduced. If a particle does not stick, in order to let its diffusion distance for the next step be positive, it gets moved a tiny distance directly away from the particle that it failed to stick to. The two variables in this simulation are the stickiness, and the push-back distance. With a push-back distance equal to 0.1 times the particle stick check distance, I ran simulations of 100,000 particles with stickiness values of 1.0, 0.1, and 0.01. The results are seen below.

(2004-03-02) I implemented bulk velocity a few days ago. The first task for each random-walk-accelerated step is to determine the nearest element in the frozen structure. The distance to that particle determines the radius of the sphere inside which the active particle must stay. With no bulk velocity, the set of candidate positions is the surface of that sphere. With a non-zero bulk velocity, the set of candidate positions is a smaller sphere tangent to the larger sphere. The radius of the new sphere is calculated by solving for the mean diffusion time that would be capable of convecting and diffusing the particle a distance equal to the distance to the nearest particle. Thus, one random-walk-accelerated step is composed of a bulk motion step, and a spherical diffusion step, instead of just a spherical diffusion step. With stickiness equal to 1.0, I ran simulations of 128,000 particles with bulk velocities of -1.0, -0.1, and -0.01. The results are seen below.

The dla3d code is written in ANSI C, and should compile with no problems on gcc 3.2-ish. I've only tested it on Linux. The code is only about 5 keyboard-hours old, so is a bit crufty. If you're really interested, grab it from the link below: